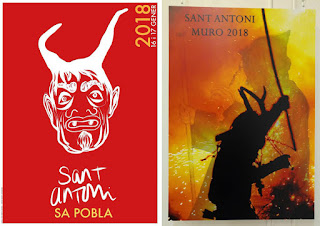 So, that's Kings done and dusted for another year. Same as it ever was: the procession from Puerto Alcudia to the old town creates havoc with the traffic. The day after, Epiphany, and perhaps the municipal services agencies are out in force dusting away any sweets lurking behind municipal planters and other street furniture. Or they are gathering what remains and are either taking the sweets home or flogging them at the car-boot sale (not that it's on today). At least there isn't the same clean-up operation as in Palma. Did you know that there were more than five tons of sweets for the Kings in the capital? Five tons! It's as well that they aren't all thrown at once.

Today is in fact a public holiday, but then, when isn't it? Five in the space of a month; Boxing Day not included. In case you're confused, and you have every reason to be, Boxing Day will be a public holiday this year, even if it wasn't last year. The holidays' list has been published for 2018. Fifteen in all, one of which is the municipality's day-off of choice. One of which? Is it just me or does Alcudia, for example, manage to sneak in two saints' days holidays per annum - Pere and Jaume?

Kings done, and attention now turns to Antoni. Quiet in January? Whoever has suggested that? There's no rest for the wicked, least of all the demonic sorts that are about to take to the streets. Sant Antoni - what a time of the year, what a fiesta, what a diabolic carry-on.

Sa Pobla, being the centre of Mallorca's Antoni universe, has already issued its programme. Nothing like being early, but then there is good reason. Tomorrow is the procession of the "Novenari de Sant Antoni". And this is? Nine days before the main day. Sort of. The day of Sant Antoni is in fact 17 January, so I make that ten. Still, nine days before a fiesta is what the novenari is all about. They used to have a procession for it in former times. In more present times they forgot about it. The procession was revived five years ago. Demons will parade, as will good Saint Anthony himself. Then it's time for "novena" prayers before the "Prohomenia" gather and select the "Clamater". Goodness, what rituals surround Sant Antoni, especially in Sa Pobla.

The Prohomenia, if you are unfamiliar with them, and you probably are, is the committee of wise men who talk over matters Sant Antoni and then move on to choosing the Clamater. This committee comprises the rector of the church, members of the "obreria", the mayor and some councillors. It's just possible therefore that there are some wise women as well nowadays. And while you're asking, the "obreria" is the organisation that looks after works at the church, but in Sant Antoni terms also has a fundamental role. It in effect supplies the manual, the rule book for the fiestas. The demons have in the past fallen foul of the obreria for breaching regulations. Too demonic perhaps.

And the Clamater, I hear you also ask? This is the person (typically, and once more, it is a male) who issues the proclamation of Visca Sant Antoni on Sant Antoni Eve. It's a pretty big deal to be able to show on your CV that you have been a Clamater. Securing the role is a bit like being a Wisden Cricketer of the Year; I believe you can only do it once. Well, it wouldn't be fair for someone to keep doing it; not when you have a total municipal population of getting on for 13,000 to keep happy. I suppose that works out at something like 5,000 men of Clamater age, or 10,000 if you include the women. In fact, the short list is somewhat shorter. The Clamater age does seem to presuppose relatively advanced years and so therefore a personal history of having acclaimed Sant Antoni and wishing him long life, albeit that he died 1,662 years ago. Allegedly.

The "clam" of the Clamater first came about as a response to a bit of a barney involving the Antonian Order in the seventeenth century. There was a risk that Palma would usurp the Sa Pobla Sant Antoni ritual by taking the saint's image away. Sa Pobla won a legal battle and all was well until, that is, 1920. It was thought that the "clam" was somewhat unseemly for a religious service - the Compline of Sant Antoni Eve - so it was dropped. It took them 82 years to get around to restoring it, and tomorrow the latest Clamater will be acclaimed.

Meanwhile, there has been intense effort in coming up with the Sant Antoni posters. As of time of writing, only Muro and Sa Pobla had made their choices. So, reproduced here are the winners - Maria Torrents i Sandberg in Sa Pobla and Jaime Ballester in Muro. The latter, one feels, is more demonic.
Posted by andrew at 7:38 AM