Greta Garbo of the Skies: Thirty-Five Years On 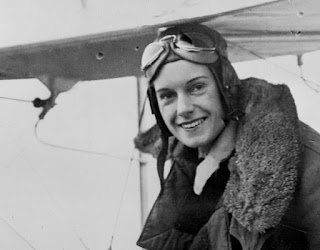 The New Zealand government has a website dedicated to the country's history. Events, topics, places, people; these are the themes. For those of us who are not from New Zealand, our knowledge of the country's famous people would probably amount to Sir Edmund Hillary, middle-distance runner Peter Snell, any number of rugby players, screenwriter Richard Curtis, actor Russell Crowe and Neil and Tim Finn of Crowded House.

On the government's website is a biography of a woman who in the 1930s had global fame. Even today, and despite the government's efforts and those of others, her name isn't that well-known in her own country. She was born in Rotorua in September 1909. She died in 1982. On 22 January this year, some people will commemorate the 35th anniversary of her burial. They can go to a communal grave in Palma; there is now a plaque. Her name was Jane but she became known as Jean and later on as the Greta Garbo of the Skies. She was Jean (Jane) Gardner Batten.

The story of Jean Batten is one with which the people of Mallorca have become modestly familiar. The name is mentioned from time to time, and with the 35th anniversary looming, it is being mentioned again. A few years ago - 2009 to be precise - there was a small controversy. They named a street after her in the La Bonanova district of Palma. The previous name had been a traditional one, but the mayor of the time - Aina Calvo - had proposed the renaming. She had met the New Zealand ambassador to Spain in 2007, he having first come to Palma in 2005, when he visited the grave and laid a rose on it.

On 16 October 1936, Jean Batten landed in Auckland. Flying solo in a Percival Gull Six monoplane, she had successfully completed the first ever direct flight from England to New Zealand. She had already flown England to Australia and in the process had smashed Amy Johnson's record by more than four days.

The reaction to her achievement in 1936 was immense. The Auckland Star reported: "History was made by this 26-year-old Auckland girl, and records tottered and crashed as her silver plane flashed through the skies in one of the greatest flights the world has ever known.” And yet, she was to all but disappear from public view after the Second World War.

From this point on, her story was one that was stricken with sadness. Various attempts have been made to piece together her life. In the 1930s she had it all. There were unquestionably romances. The New Zealand novelist Fiona Kidman points to one in particular: that with an Australian pilot, Beverley Shepherd. He was killed in a plane crash in 1937. Kidman suggests that she never really recovered from this.

In 2009, the NZ Herald ran a feature about a Mallorcan graphic designer, Rosalia Coll, who had become fascinated with Jean's story when the centenary of her birth was commemorated in Palma in that year. In that feature, which also refers to the diligent research of Batten's biographer, Ian Mackersey, it is said that Jean had a determination to avoid New Zealand. Despite the acclaim she had received, it seems that she felt unappreciated. Mackersey's work has been praised but also criticised for an essentially male-centric assessment of Jean's personality. She was an enigma who didn't conform to the image of womanhood at the time. She had an androgynous or even male personality.

Whatever the complexities of her personality, something drove her away from New Zealand. She travelled with her mother, Ellen, and they eventually settled in Tenerife. Along the way, as Fiona Kidman notes, there were other potential reasons as to why she became so reclusive. Kidman says that Jean almost certainly had an affair with Ian Fleming, while she was with her mother in Jamaica. She believes that the character of Solitaire in Live And Let Die was based on Jean. In 1951, Fleming married Ann Charteris. Kidman is unsure whether it was a coincidence, but Jean and Ellen suddenly left Jamaica.

Jean was to re-emerge into public life after her mother died in 1966. She travelled again, using Tenerife as a base. In 1982, she came to Mallorca and intended to buy an apartment. She notified her publisher of her address in a letter of 8 November 1982. She died on 22 November. She had been bitten by a dog and had refused medical treatment. She suffered a lung infection that killed her.

She had only been in Mallorca for a very short time. Two months after she died, she was buried in the pauper's grave. It is both said that the local authorities didn't know who she was and that a bureaucratic error led to the New Zealand authorities having been uninformed. It wasn't until 1987 that a nephew came to Mallorca and confirmation was made as to who she was.

* Photo of Jean Batten from https://nzhistory.govt.nz/people/jean-batten