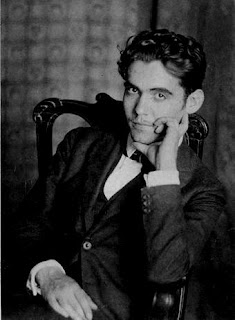 In Palma there is a road which lies between the avenues for Joan Miró to its north and Gabriel Roca to its south. This road forms a junction of which the street for Fray Juniper Serra is one part. Roca was Palma born and bred. He oversaw the development of the port, was a one-time president of the Fomento del Turismo (Tourist Board) and was behind the creation of the Paseo Marítimo, otherwise known as the Avenida Gabriel Roca. Father Juniper was from Petra and is now Mallorca's second home-bred saint. Miró was not from Mallorca but made the island his home.

The road in question bears the name of someone who did not have the associations with Palma or Mallorca that these three did. Yet his name resonates as loudly, not just in Mallorca but across Spain. He was executed in 1936. He was one of so many who lost their lives senselessly. He was a poetic and literary genius. Had he lived, he may well have become one of the iconic names of twentieth-century literature, a global name as well known as a contemporary and a friend, Salvador Dali. As it is, he is iconic enough, as much for the work that he produced as for the pointlessness of his killing. He was Federico García Lorca.

"The moon is dead - it will come back to life in the spring." The moon is often to be found in García Lorca's work. As are gypsies. He really came to prominence with his collection - Gypsy Ballads - in 1928. By then he was part of the Generation 27 of avant-garde artists. Dali was another. He was not of gypsy stock, but he was from Andalusia, land of the Romani and the flamenco. "At the forge the gypsies cry and then scream. The wind watches; the wind watches the moon."

The moon was not to come back to life. Did the gypsies cry and scream when they learned of his death? A month after the outbreak of the Civil War, García Lorca was shot by Nationalists near the village of Alfacar in his native Andalusia. The exact circumstances of his death have never been confirmed. His remains have never been found.

It was only three years ago that a police report from 1965 came to light. It was produced by the police in Granada and it stated that García Lorca was assassinated for having been a socialist and a mason and for having indulged in "homosexual practices". It went on to say that he had been at the home of friends, the Rosales. He had taken refuge there. The house was surrounded by a "large unit of militia and assault troops". He was shot, says the report, in the vicinity of a place known as Fuente Grande and buried in a ravine, somewhere difficult to locate.

The Irish researcher and writer Ian Gibson, an expert on García Lorca, says that the documentation contained errors, that it reflected what was being said in Granada at the time and that it had in fact been referred to by a journalist called Eduardo Molina in a book that was published posthumously in the 1980s, The Last Days Of García Lorca. Molina died in 1979. He was a Falangist.

In an article from just last week in El País, Manuel Vicent tells of encountering a man in a bar in Granada. As he took his wine, this man would ask for forgiveness: "Forgive me, Federico, forgive me." This man was a member of the Rosales family. He was also a Falangist.

García Lorca had Republican and socialist sympathies. His homosexuality, while assumed, was unsubstantiated. Despite this, he had many admirers among those lined up against the Republic: the Falange in particular. It is said that he would regularly dine with the founder of the Falange, José Antonio Primo de Rivera, who himself was executed by the Republican government three months after García Lorca was shot. In March 1937, a Falangist publication denounced his murder: "The finest poet of Imperial Spain has been assassinated."

Gibson believes that García Lorca's murder was the result of a conflict between two right-wing forces: the Falange and the Confederation of the Autonomous Right. There are other theories, one of them being "family quarrels". As for his remains, it is speculated that his body was exhumed not long after he died. By whom it is not known.

This Saturday at the Palacio de Congresos in Palma, the great Spanish soprano Ainhoa Arteta will be joined by pianist Rubén Fernández-Aguirre and flamenco dancer Pilar Astola in a tribute to García Lorca.

His moon fell dark at the age of just 38, but another moon will watch from over Palma Bay. And while the wind watches the moon, more than only gypsies will cry.
Posted by andrew at 7:03 AM