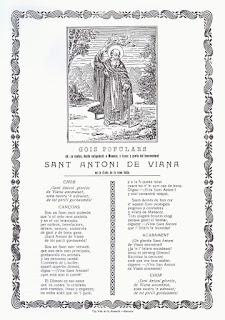 This evening in Manacor's parish church they'll be singing the "goigs" of Sant Antoni. The goigs are, roughly speaking, songs of joy or praise. They are sung elsewhere in Mallorca in celebration of the ancient saint, there are even practices for them in other villages, but Manacor specialises in the number of its rehearsals and the sheer emphasis placed on when the good folk of the town eventually gather for the real thing. While the likes of Alcudia and Muro are being bedevilled by demons with fire, Manacor is in the church and having a good old sing song.

Given Antoni's history, you will be unsurprised to learn that the goigs aren't entirely joyous in terms of content. Here was an ascetic saint who did after all live in the desert and was pestered by the devil on a regular basis. Hence, there are references to Lucifer (and the saint's triumph over him) and to the "perverse Demon". But thanks to the saint having not succumbed to the devil, the chorus for Sant Antoni - "glorious Sant Antoni" - calls on him to "guard us from all peril".

The Abat is a reference to an abbot. Antoni never was an abbot. Nor did he found a monastery or an abbey. It would have been difficult for him to have, given that he spent so much time by himself, living in caves or an abandoned fort in the Egyptian desert. The abbot part of his name would seem to have been given to him several centuries after he died (supposedly in 356 at the age of 105) and in a place a fair old distance from Egypt.

It is said that Antoni's preference was to have been buried in a secret place. As it turned out, the place wasn't so secret. His remains were taken to Alexandria and eventually to Constantinople, but they didn't stay there. In the eleventh century, concerned about what the Arabs were up to, Antoni (what was left of him) was transported to a region of France - Auvergne-Rhône-Alpes, as it now is. A grand church was built in order to house him. The place became known as Saint Antoine-l'Abbaye. It was near to a village called Vienne which, to give it its Catalan name, is Viena del Delfinat. In Mallorquí, Viena was transformed into Viana.

The pig angle does, however, require a little more explanation. In 1095, a monastic order was founded in Sant Antoni's name in Saint Antoine-l'Abbaye. This was by a nobleman who was said to have been healed by the saint's relics. At the time there was a serious illness - ergotism, caused by the ergot fungus on cereals. This order went on to establish hospitals and to treat ergotism. One of them was in Palma.

A point about the pigs was that the monks from the order used pig fat in the treatment of patients - they would be smeared with it. Another point was that the pigs that belonged to the order were very much free range. They went more or less where they liked and were fed by the local people, who also gave food to the monks. This was despite the fact that in 1719 pigs were forbidden from wandering around the streets and squares of old Palma. The monks fought against the prohibition and retained their pig privileges.

The pigs were well looked after until it came to the day of Saint Martin, 11 November, which remains the traditional start to the "matances" season, the slaughter of pigs in order to make products such as sobrassada.

The order was dissolved in the late eighteenth century. It was the one which had in the seventeenth century tried to get the image of Sant Antoni moved from Sa Pobla to Palma. A lawsuit put an end to this, and the victory of Sa Pobla still inspires the cry of "Visca Sant Antoni", which will bellow out of the church this evening at the end of the Compline service. That victory does rather sum up the place of Sant Antoni in Mallorca's culture. He is very much the saint of Mallorca away from Palma, but when it is said that Antoni is the saint of Mallorca's peasant class, it is always Sant Antoni de Viana who is named.