By The Grace Of Grace: Quely 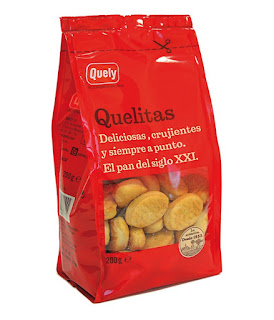 Ah yes, the biscuit. Which one takes your fancy? A chocolate digestive perhaps, a Garibaldi, a custard cream? Versatile the biscuit most certainly is. The simplicity of this humble product has inspired culinary and design creativity: the patterned biscuit; ones in individual thin-foil wrappers; others in tins, separated by equally thin slices of paper. Savoury or sweet, the biscuit was the original snack, though it was really a very cheap form of feeding the poor. The Persians, it's reckoned, first expanded its possibilities by introducing fruit and honey.

What does a glass factory have to do with biscuits? Very little as it happens, other than proximity. The Menestralia building can be seen from the motorway. It is reached by taking the Campanet and Buger exit. Next to it is a large unit (an old leather emporium) that has been unused for years. It is now being put to use, and the user is the company that is synonymous with biscuits in a Mallorcan style: Quely.

The story is of course told that the name came from Grace Kelly. Quely, Kelly. I don't know that it was a pronunciation issue - there are, after all, Las Kellys, the hotel chambermaid collective, who pose little problem for the Mallorcan or Spanish tongue - more the case of etymological transformation, and one perhaps with a gag. Qué es Quely (o Kelly)? Also, well, Kelly would have seemed a bit odd to your everyday Mallorcan in pre-supermarket days.

It was the mid-1950s - 1956 to be precise. Grace Kelly had married Prince Rainier of Monaco in April of that year. They came to Mallorca on honeymoon. They stayed at the Hotel Formentor. A businessman from Inca happened to be at the hotel for a party that was thrown by the newly-weds. He was one of the Domenech boys, son of Jaume, who first had the idea for biscuit manufacturing before the Civil War. The actress captivated him, and there was the spark of that biscuit creativity which had been passed down the centuries. Rights were acquired - Grace herself was said to have helped - and the spelling was changed. Quely was born.

It is perhaps odd that, on its website, Quely doesn't mention Grace Kelly in its history of the company. The explanation given is that the brand name appeared in the 1960s and that it came about "by chance" after a failure to register what was intended to have been the name: Cor de Mallorca (Heart of Mallorca). Apparently, there was a problem with registering a name that was in Mallorquí (or Catalan), so Madrid said no.

Although Cor de Mallorca might have been more, shall we say, patriotic in a local way, it didn't really have much of a ring to it. Quely can probably be grateful to the Franco administration in this regard. How would there ever have been bags of Quelitas, if Cor de Mallorca had won out? Coritas perhaps.

To go right back to the beginning, and so before Jaume had his idea for a biscuit factory, there had been a bakery and oven in Inca called Ca'n Guixe. It was around from 1853. This most modest of origins is a long way from the unit next to Menestralia, though the unit itself (let's call it a warehouse or logistics centre) isn't that far from Inca: it's just a bit along the motorway in fact.

Around ten years ago, Quely took a big leap into the export market. The leap has proved to be very successful. There are Quely biscuits in at least thirty countries. The first move, strangely maybe, was into Hong Kong. Australia, Saudi Arabia, Mauritius; these followed. Germany and China are among new markets. So with all this export activity, Quely has needed a new logistics centre. Well you would, if you go from exporting some 180,000 packets of biscuits to seven million in the space of eight years.

Quely is quite clearly a Mallorcan success story, and it is a success that owes virtually nothing to tourism. Unlike, for example, Mallorcan wine and olive oil, for which there have been strong efforts to market to tourists as a means of promoting export sales, Quely's biscuits have gone down an alternative route. I mean, how often do you bump into tourists from Hong Kong or Saudi Arabia in Mallorca?

Moreover, its success isn't based on an overdose of creative biscuit packaging. Quely comes in a bag. There aren't the foil wrapper trimmings or anything like that. There is, even for an industrial operation, a sense of the artisan about the product. And it is one that has cornered the market. There was a rival attempt - a Ros d'Or brand biscuit that used Rafa Nadal as its advertising face. It sank, and Nadal ended up being a Quely ambassador instead.

So let's hear it for Quely. By the grace of Grace Kelly.
Posted by andrew at 7:34 AM