The Colour Purple For Saturated 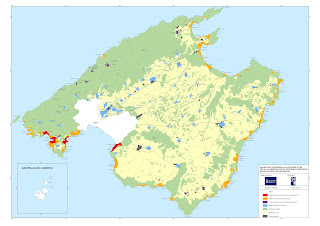 What do you think to the rentals zoning map then? I trust you have paid careful attention. A great deal of work has clearly gone into producing something as mind-boggling as has been produced. But while you have been attempting to decipher the meanings of red, purple, blue, orange, yellow, green and grey, you might have overlooked a logo on the bottom right-hand corner. The logo is for a consultancy called GAAT, which stands for Gabinet d'Análisi Ambiental i Territorial.

This consultancy, according to its website, has twenty years experience of environmental and territorial work in the Balearics. One of its commitments is to the protection of the islands - "always fragile and under constant pressure". It has drafted numerous urban plans in Mallorca and Menorca, and indeed it has. GAAT is a very respected consultancy.

But behind every consultancy, might one suggest that there are some politics. One of the two heads of projects is Maria Magdalena Pons Esteva. She was a candidate in Binissalem for Més at the 2015 municipal elections. Politically, the zoning map has been the responsibility of a PSOE councillor at the Council of Mallorca, but it is a map which seems to meet with the approval with the Més president of the Council and with those in Més higher up the political food chain, those in the government.

The politics of the zoning is already evident. The map was unveiled on Friday, and the reaction - at municipal level - shows the obvious disagreements. Miquel Àngel March, mayor of Pollensa, isn't from Més, but he was a one-time GOB spokesperson. He approves of the map, as does Jaume Servera in Soller. He is a member of Més. Servera and March appear content that their "pueblos" have been declared saturated.

Other mayors aren't content. The Partido Popular's Llorenç Galmés in Santanyi fails to understand what criteria have been applied in declaring Santanyi "saturated". I'm unsure what the PP mayor of Binissalem thinks, but then Binissalem is blue not purple, i.e. it is not saturated or a pueblo with major tourism pressure, which strictly speaking is how the purple pueblos are defined. Toni Mir (El Pi) in Alcudia says that "we are not in agreement" with the saturation declaration. By we, one suspects he means El Pi. The PSOE partners plus the chap with Més-type leanings who has the environment portfolio may well think differently to the mayor.

El Pi is the party which has most been to the fore in defending holiday rentals. The PP, one has to say, are johnny-come-lately converts. They never were when they were in government. Opposition is of course a different matter. The government's regulation of holiday rentals has been a "disaster" from the word go. Maybe, but no more disastrous than the PP's was.

While El Pi and the PP do accept that something needs to be done in order to avoid excessive amounts of rentals and problems with housing, they are taking issue with the sixty-day business. Alcudia, Pollensa, Santanyi, Soller: here are pueblos where there will be rentals for no more than sixty days a year, and these have to be owners' main places of residence. Things are different in each of these municipalities' resorts. They are orange and not the colour purple, meaning that they are not saturated and can therefore have rentals that are made available for 365 days a year.

The PP, despite the apparent hypocrisy they are now spouting, given their stance when in government, do have a point when they refer to the "permissiveness" being shown to coastal resorts while there is, at the same time, restriction in many of the pueblos. It is, as Galmés notes, hard to understand precisely what the criteria. At what point does somewhere become "saturated" and according to what rationale? The consultancy presumably knows.

There is an air with this map of some sort of academic exercise. There may be very sound thinking and methodology behind it, but it would be nice to know precisely what. A further point about the map is that it is, for the time being, largely academic. The Council's PIAT plan for intervention in tourist areas has yet to be completed. It may mean some modification of the zones. The Council explained that it was taking the consultancy firm longer than had been expected to finalise the PIAT. And yes, GAAT is working on this as well.

A further academic aspect is that we don't have any idea how the holiday rentals places (some 30,000) are to be allocated. One assumes that they won't be on a first come, first served basis. So the zoning map is for now comparatively bare. At some point, they'll start putting Monopoly-type houses (flats) on it in order to make it complete. Red, purple, orange, blue and yellow houses. Mind-boggling.
Posted by andrew at 8:15 AM