The Old Woman Of Lent 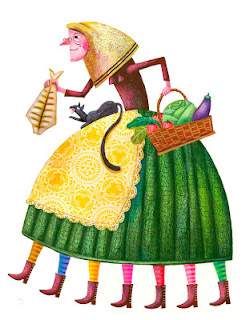 Were there to still be the practice, some time around the second week of March folk would take themselves off to the town hall square in Palma - Plaça Cort - and saw an old woman in half. The old woman, by then, would be deprived of four of her seven legs. Her fate would be determined, roughly speaking, by the halfway point of Lent.

Antoni Maria Alcover, sage of the Mallorcan folk tale, explains: "The Jaia Serrada was an old woman made of paper, cardboard or painted wood. Thin and haggard, she had a cod in one hand and a bunch of carrots in the other. She had seven legs and seven teeth. On the first day of Lent, they hanged that old woman in the kitchen or the dining room, and on each Sunday they cut off one leg of the seven she had until by Holy Saturday (the day before Easter Sunday) she had no legs at all, and they would discard what remained of her. But by the middle of Lent they were already performing an operation, from which came her name (serrada - sawn), and it was on the Thursday of the fourth week that the old woman was taken down and sawn in half, because half of Lent had passed."

Her name, prior to being sawn in half, was Jaia Corema, the old woman of Lent. How she came to be as she was is something of a mystery, but her main purpose was to act as a form of calendar. The father of the household would ceremoniously cut off each leg, so the family knew where they were in terms of the period of abstinence. The Jaia came in different varieties. The cod was a constant element, but she could also hold a small grill and a rosary.

The Jaia is just one of the folk legends that surrounds Mallorca's Carnival and post-Carnival. There has been a sort of revival of her story. In Porreres on the fourth Sunday of Lent they conduct the public trial of two straw dolls, who are then executed because of their bad behaviour. Afterwards, they all tuck into some coca pastries and wine. Lent it may be, but Lent is not totally for the observance.

Once upon a time of course, they did take the abstinence pretty seriously, but what preceded it - namely Carnival - was anything but serious. The grand parade for Carnival, in Palma at any rate, didn't appear until the early years of the last century, but there had been parades with costumes and masks for a good two hundred years prior to the grand parade.

It all goes back, it's reckoned, to Pope Gregory the Great in the late sixth century. He came up with the idea for a period of fasting prior to Easter as a way of mirroring Christ's fasting in the desert. Carnival was thus a period of excess in the lead-up to Lent. But Pope Gregory wasn't the perhaps inadvertent originator of Carnival as such. The origins are pagan. The excess, the wearing of masks, the mocking of important people as well as a celebration of the return of the sun - these are all rooted in the dim and distant past.

The Church and the State have not always been terribly at ease with Carnival. Franco did of course ban it. In Cadiz, where Carnival has long been celebrated more wildly than anywhere in Spain, they had a special event in February last year to mark the eightieth anniversary of the prohibition. The Franco regime's repression was at least partially motivated by a fear that Carnival could be used as a time to show dissent. And this wasn't the first time that the State had been concerned about this.

Carlos I in the sixteenth century slapped on a ban. It remained for several decades until it was lifted by Felipe IV. But some one hundred years later, during the reign of Carlos III, there were other bans. In 1776 in Mallorca, the Marquis Alos, the captain general and governor of the Balearics, issued a prohibition. There could still be parties but these had to be limited to friends and relatives. Masks were not allowed. Behaviour had to be modest, and anyone who didn't comply or who was out on the street after nine in the evening faced a jail sentence.

This was all a consequence of Church pressure and fears about social uprising. The Esquilache Riots of 1766 had been sparked off by the rising cost of cereals, bread and other staples. There was also a severe drought that lasted well into the mid-1770s.

Carnival is therefore as much a socio-political celebration as it is a cultural one. It is said that Carnival has been moulded to suit tourism. This may be the case in places such as Tenerife, but in Mallorca the tourist dimension is by and large absent. It is essentially a time for some fun, for dressing up and holding parades of floats. As for the Jaia Corema, well yes, she may still be about, but her tradition is not as it was.