Will The Davis Cup Really Come To Alcudia? 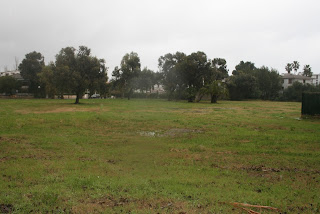 Alcudia wants to stage the Davis Cup quarter-final between Spain and Germany. The Balearic government wants Alcudia to; the Council of Mallorca is supportive; the Balearic Tennis Federation says yes; the Alcudia hoteliers want the tennis as well (naturally enough).

If one were being purely objective and it was a case of anywhere in Mallorca being lined up for the event, then there are probably easier options. They might even involve existing tennis facilities, such as courts and stands. When the announcement was first made about Alcudia, I was racking my brain - where are they planning on holding the event? They were talking about ten thousand spectators on temporary stands. Where?

From what one can make out, there are two possibilities. The less favoured would appear to be where everyone once thought was going to be something to do with Mercadona - the land that was levelled in front of Garden Lago on Avenida Tucan. The preferred site seemingly involves where the circus used to be held on the land by the Magic Roundabout. The tournament village would go there, while the court and stands would be on another plot behind it.

The cost of all this, never mind the logistics, would be at least one million euros. The government will probably cough up, although the tennis federation - understandably enough - is seeking some assurance as to who will be paying for what and how much. Time is running short. The tennis federation needs all the documented proposal by Monday. The tie is over the weekend of 6 to 8 April. The Spanish federation has to make a decision by Monday week.

Well, it would unquestionably be excellent news if a high-profile sport event such as the Davis Cup were to come to Alcudia. But is it realistic? And why actually is everyone so keen for it to be in Alcudia? One reason is the municipality's profile of being a destination for sports tourism. In this regard, it fits in with the government and the Council of Mallorca's quest for tackling tourism seasonality. Sport is a tourist product mainly for the low season. Another reason is that German tourists will get to know about Alcudia. Yes, and those German tourists would probably then be more inclined to come in the summer, on top of all the thousands who already do.

We will shortly find out if Alcudia will be successful in its bid - there's stiff opposition from the likes of Valencia. But if it is successful and there are indeed to be ten thousand spectators, there is another question. It is being said that the Magic site is well connected in transport terms. Which it may well be, but what happens with the transport, such as cars? Where would they park?

* Would they really hold the Davis Cup on this site? In a residential area near to Sunwing.
Posted by andrew at 8:19 AM