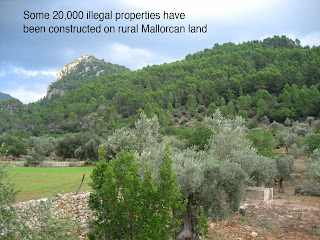 If a daily count of the most frequently used words in a collection of Spanish newspapers were to be undertaken, my guess would be that the word "ilegal" would be high up the list. Illegal is pretty much a fact of life here. So much so that it isn't always obvious what is legal and so much so that the very word "ilegal" has all but lost the potential to shock or surprise, so common is the incidence of things which are supposedly illegal.

The proliferation of illegality arises in part from a propensity among a not inconsiderable section of the local population to believe that illegality doesn't actually apply to them or to believe that it may apply but will eventually somehow be deemed legal. And occasionally, it is right for members of this section of the local population to believe that the illegal will suddenly become legal. If a regional government so decrees it, what had been outside the law is brought inside the law, and is inclined to be done so if it means that there's some money in it.

The beneficiaries of legalising the one-time illegal tend not to be ordinary Joe Soaps (or José Jabones). Rather, they are usually the less ordinary José Jugadores, the players of a system which can often appear to reward the less-than-scrupulous who, because of what they might have (money, power, connections and generally a combination of these), can be right in assuming that somewhere along the line they will get away with something.

The regional government has been drafting a land law - Ley de Suelo. This drafting has been taking an eternity and the time that it has been taking is in itself revealing. Whereas the government can draft, present and approve certain laws quite quickly if it so wishes, there are others which require much more time and more dotting of i's and crossing of t's. All very normal, you would think. Some laws are more complex, and land is far from not being complex, but compare the more than a year that has passed since the drafting was started with the rapidity of, say, the law on introducing trilingual teaching. Was this not complex? No it wasn't; not if the government ignored much of the complexity. And nor was it complex if the government, having passed the law, found to its horror that part of it was in fact illegal, and so hastily convened a meeting of the cabinet and, without any consultation with parliament, simply made legal the illegal. See, it can be as easy as that.

The teaching law did not, however, have any clear vested interests to take account of, other than those of the government itself. The land law is a very different matter. There are all those José Jugadores to think about for a kick off. And so the upshot of the drafting and the amending is that this new law will declare an amnesty on at least 20,000 properties that have been built illegally on so-called rustic land, i.e. rural land for which there was no building permission.

The very fact that someone brazenly goes and builds on land where they shouldn't be building says much for the mentality of the José Jugadores. And for their belief in legislation ultimately being written to remove the illegality. All that will probably be required to make things tickety-boo will be the handing over of around ten grand in folding notes to a relevant town hall. That's where the money comes into the story and is why the town halls have themselves been quite keen for the law to be passed. And it won't just be whole rural mansions or grand houses that will now be legalised (and they normally are grand houses; the José Jugadores don't do pokey places). So also will be farm buildings, such as barns, that had been adapted as accommodation; again completely without permission.

Personally, I find an alternative to legalisation - that of demolition - to be distasteful, but there are times when perpetrators of the distasteful get their rightful come-uppance and their properties are indeed bulldozed. This happened to the disgraced and incarcerated former mayor of Andratx, Eugenio Hidalgo. As his crime was to have been involved in schemes to allow illegal building, then he got what he deserved, and so did his house. But though normally it seems somehow wrong to resort to demolition, one does have to bear in mind the process whereby the property was ever illegally built. It's the process of playing the system by those, more often than not, who are in a position to benefit from changes to the system which, and do not rule this out, they might actually also be in a position to influence.

It's distasteful to demolish but it is equally distasteful to have built in the first place, and to add to the bad taste, there is another law which one has to consider when it comes to these grand houses in rural locations. The tourism law. It paved the way for a whole new range of rural tourism accommodation to be permitted. And which properties might now become such accommodation? No prizes for guessing. So, here is further evidence of the way in which tourism law has been created in collaboration with the way in which property law is drafted. The result is a tourism law which does of course penalise owners of perfectly legally built properties but which are deemed illegal for tourism purposes while at the same time giving an opportunity to owners of property that was illegally built. One rule for one ...
Posted by andrew at 7:39 AM