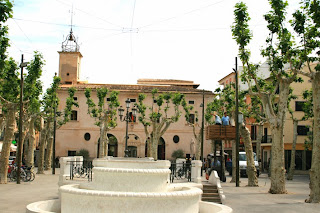 In September last year, the Japanese ambassador to Spain pitched up in Inca, where he declared that Mallorcan footwear was very popular in Japan, something that would have been welcome news to the leather and footwear industry with which Inca has long been associated. A few months before the ambassador's visit, a Japanese television production company had been in Inca. It had been making a programme about tourism possibilities offered by the town and by its footwear industry in particular. Featured heavily in this programme was the town's footwear museum, a building of some grandeur which unfortunately is not matched by what is inside it. A museum thrives on having lots of museum pieces. Inca's doesn't. Or didn't at any rate.

Inca town hall's tourism councillor (and yes, there is one) placed the Japanese programme within the wider context of attracting tourists all year round. Inca doesn't really have a great deal of tourism as such. It attracts plenty of them to its weekly market, and the leather shops are also an attraction, but the town is not a place to which tourists habitually hot foot it to in order to stay a week or so. It just isn't that sort of a place. It is an industrial town and, despite it having some interesting and attractive features, it is, if one is being perfectly honest, one of Mallorca's less appealing towns.

Hoping that Japanese tourists will suddenly discover Inca and flood into the town sounds a bit of a pipe dream. They might do were they already on the island, but Japanese tourism to Mallorca is far from being big business. It is very small business to the point of being almost non-existent. But such an obstacle should not deter a determined town from attempting to drum up something from the all but nothing. There are, after all, some potential Japanese cruise tourists who might fancy a swift trip up the motorway for an even swifter lavishing of credit cards.

And so, following in Inca's footsteps, comes Sa Pobla, a town which attracts hardly any tourists. Ever. Well, that's not strictly true of course. There are some who attend the jazz festival and some, those who have been let into the secret, who get frightened at Sant Antoni, but otherwise potato production is not a big draw for the tourist. Curiously enough, however, Sa Pobla is a place which is designated as a tourist zone, presumably because of its proximity to other places which genuinely are. This allows its shops to keep opening hours akin to those in, say, Alcúdia.

The local shopkeepers will, therefore, have been looking on with horror at the prospect of actually adopting tourist-zone opening hours as the Japanese consul general and mayor Biel Serra joined hands on a shovel and planted a cherry tree together. There is much in common between Sa Pobla and Japan said the mayor's advisors: rice, of which there is a lot in Albufera; eels, of which there are also many; cherries, of which there is an abundace. They missed one other: Biel himself, whose rigorous training regime has been turning him into a Sumo wrestler.

So there we are. The people of Sa Pobla had better get used to a year-round influx of happy-snappy Japanese sorts. Unless, that is, they have only got so far as Inca, emptied its footwear emporia and headed off back to the ship.

Photo from Talk of the North.
Posted by andrew at 7:51 AM