Gambling Men: The PP and the casino 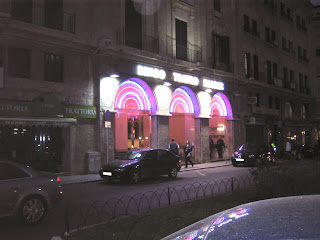 A week ago, there I was, suggesting that José Ramón Bauzá probably had a clear run towards being re-selected as Partido Popular presidential candidate for the regional elections in 2015. But it was a clear run because of the lack of any obvious challengers, except perhaps Maria Salom at the Council of Mallorca, rather than because the party was unanimous in being enamoured of him; the other Salom, Jeroni of that ilk, the president of the party, was clearly not.

What I couldn't have anticipated, however, is what is said to have transpired at Palma's yacht club the other day and which involved, in one corner, Mateo Isern, the mayor of Palma along with his number two and tourism councillor, Álvaro Gijón, and in the other corner, José Ramón and one of his oppos, the economy minister, Joaquín García.

Reports suggest, and there is no reason not to believe them, that there was more than just a slight argument involving the two camps. At one point, Isern didn't offer Bauzá outside but offered him behind, grabbing hold of him and taking him behind some curtains to give him a piece of his mind. Various matters were raised but what had caused temperatures to rise, and for Gijón and García to have already exchanged unpleasantries, was the government's decision to site Mallorca's second casino in the Teatro Balear in Palma. Isern and Gijón want it to go in Playa de Palma as part of the resort's regeneration and where the scheme for its location would also involve the building of a new five-star hotel.

What Isern wanted to know, among other things, was how the Playa de Palma alternative could, in the evaluation process, score virtually "nul points" in terms of guarantees and financing offered when the company involved would be the same one which currently operates the casino in Porto Pi and which had previously operated the casino when it was sited in Sol de Mallorca, i.e. one with a not insignificant amount of credentials and experience when it comes to casinos.

Gijón, it would seem, questioned the process of competition for the casino overseen by García, while both the Palma men were, to say the least, disappointed that what could have been a cornerstone of the transformation of Playa de Palma was being removed.

As far as the decision is concerned, I'm inclined to agree with Isern and Gijón. I don't really give a damn whether there is a second casino, but if there is to be one, then Playa de Palma would appear to be preferable because of the regenerative potential it would have. But the politics of the spat seem altogether more entertaining.

If you're Bauzá and you want to fall out with a mayor from your party, then it probably doesn't matter if that mayor is in charge of some backwater, inconsequential, alleged municipality comprising a few hundred inhabitants and several hundred goats. But if that mayor happens to be in charge of roughly half the population of Mallorca and is mayor of a town hall which behaves as though it was a government in its own right, then it probably does matter. And so, from nowhere, we are presented with the delicious prospect that Isern, having fallen out with Bauzá over the casino, might fancy a pop at being leader of the party. We can but hope so, as suddenly things have become potentially very much more interesting than they were a week ago.

It would of course be instructive to learn what the "various matters" other than the casino were when Isern offered Bauzá behind. Isern hasn't, for example, appeared to have been a flag waver for the anti-TIL faction in the PP, but he will know that it could yet prove to be a problem when elections come round. Whatever these matters are, though, he clearly isn't happy, and he is one of the few really big beasts in the PP who could make things awkward for Bauzá. He is also, were he to choose to thrown his hat into the ring, a somewhat more personable figure, not one who hasn't had his own critics but one who might just cut a more sympathetic character than the presidential incumbent.

Yep, a week is a long time in politics, and Bauzá might just have found out how long a week can be. Let battle commence?

Photo of the Teatro Balear from Wikipedia.
Posted by andrew at 12:10 AM