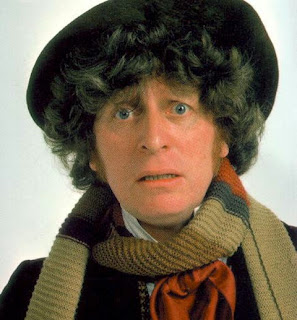 Saturday, 23 November, 1963 is a date of great significance in British television broadcasting history. The first episode of Doctor Who was aired. The day before had been altogether more momentous. Kennedy was shot. My eight-year-old logic told me that the shooting in Dallas would mean world war. It was one of the first times a major news event had truly come into my consciousness, and I was frightened. In theory, Doctor Who, broadcast some 24 hours later, should have made me more frightened. I don't recall that it ever did. The Daleks were never scary; even an eight-year-old could figure them out.

The fiftieth anniversary of Doctor Who, you might be surprised to learn, has been generating a degree of interest in Spain. The newspaper "El País", for example, has been devoting space to the anniversary and has issued fifty tweets with links to various episodes featuring the different Doctors. It does, though, have to do a bit of explaining. In one article it says that "Doctor Who es un viajero en el tiempo". This begs a question, therefore, as to how well known Doctor Who is in Spain. An answer, according to one commentator in the paper, is not very well. Though Doctor Who has been highly popular in many countries, in Spain it does not seem to have provoked "una gran repercusión".

This isn't that surprising. Though the first Peter Cushing film - "Doctor Who y los Daleks" - was released in Spain in 1967, it wasn't until 1988 that the television programme was broadcast and only shown between 1988 and 1991 on four regional channels in Galicia, Catalonia, Andalusia and Madrid. The episodes were all from the Tom Baker years.

News of the first broadcasts in Catalonia received coverage in the newspaper "ABC". "Doctor Who is a curious person belonging to a superior race of time lords. The Doctor travels across time on board the "Tradis", a spaceship in the form of an English telephone cabin." Well, maybe "Tradis" was a typo, while going into detail as to the exact nature of the telephone cabin was probably unnecessary. The article went on to explain that the fourth Doctor, Tom Baker, had set out to make his interpretation of the Doctor one that was a parody of Harpo Marx. Baker was always the best Doctor, in my opinion, and he invented a manic Doctor, but Harpo Marx? Maybe it was. The comparison has also been made by a Doctor Who historian, but I confess it never occurred to me.

Doctor Who's popularity worldwide was such that by the time the first episodes were bought by Spain, the series had been sold to some 60 countries. Many years before those first Spanish episodes, it had been bought by three Spanish-speaking countries - Venezuela, Mexico and Chile - at the back end of the 1960s. It seems a bit odd that it should have taken so long for sales to be made in Spain, though maybe not. France and Germany only started buying in 1989. Nevertheless, the Doctor was well known in many parts of Central and South America by the time that Spain got in on the act, and in Spanish parts of the American continent he was typically known not as Doctor Who but Dr. Misterio. He was never, by the way, Doctor Quién.

Otherwise, names tended not to be changed. The Daleks were "los Daleks", Morbius was "Morbius", but the Cybermen posed a slight difficulty. They became "los Hombres Ciberneticos".

The mounting excitement ahead of the anniversary is because of the special with Matt Smith and David Tennant that is to be broadcast on Saturday, and there is no lack of excitement among Spanish aficionados. "The Day of the Doctor" is to be broadcast simultaneously in several countries, but it won't be in Spain. It will also be shown in 3D in cinemas in different countries, and it seems that pressure from bloggers and fans has meant that the Cinesa cinema chain will show it, but only on a limited basis. It will be shown on the Spanish Syfy satellite channel some time in February, by which time any real fanatic will doubtless have found some way of seeing it. The best advice is probably to find some nice local Brits who have the BBC and go watch it round their place.

So, the fiftieth anniversary is likely to be somewhat muted in Spain. Whether Doctor Who represents anything more than an obsession among a very small band of fans in Spain is hard to say; a Facebook page for Doctor Who España only has some 900 likes. Still, parts of the Spanish press think it's a significant anniversary, and indeed it is.

* I acknowledge the wiki website www.broadwcast.org for information here.
Posted by andrew at 7:45 AM