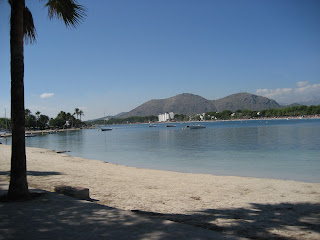 You wait years for controversies to arise in Alcudia's port, and then two of them come along together. They involve the marina, Alcudiamar, and the area between the fishermen's pier and the commercial port's terminal: much, therefore, of the port zone.

Both of them have the involvement of the Balearic Ports Authority. While it doesn't operate Alcudiamar - it has always been private - it does have a say: it is the authority which grants the concession. Alcudiamar has negotiated an extension of the concession until 2030, an aspect of this being an investment project for a further 12,000 square metres of dock. No one, apart from Alcudiamar, seems to actually want this, a local movement - Salvem el Moll (save the port) - has been formed to stop it, while the town hall is against it as well.

A first independent report into the project has established that it would not make any difference to the movement of sediments. A further one is needed to assess what might happen to water quality, and we are talking here the potential impact on the sea water where the beach starts and where the sea is exceptionally shallow. The town hall, in the form of the two main parties - El Pi and PSOE - has declared itself in favour of a project for marina improvement but not the one being planned. It is worried about water quality and Alcudia's array of certification for standards plus the Blue Flag.

Gent per Alcudia provides the other councillor to the ruling administration. This combination of Més, the Republican Left and independents wants the immediate cessation of any work at the marina. So, the town hall is, to an extent, divided. The environmentalists, GOB, have added their views: they want an immediate halt to any expansion.

El Pi and PSOE can overrule any opposition from Gent, as they have enough councillors to do so, but the Gent councillor, Tòmas Adrover, was brought into the administration with specific responsibility for the environment. It would now seem odd if, when a major environmental issue arises, his views were to be overlooked. These coincide with GOB and with the regional government's environment directorate: there has to be an environmental impact assessment report by Alcudiamar, something that would be subject to subsequent all manner of scrutiny and probably challenges.

At the back of all this is the inevitable collision of private interests and those of the public (some of them anyway). And in Alcudiamar one has the greatest of these interests in the port. Those involved with it basically run the port: that part of it which isn't run by the state in the form of the ports authority. The clash has echoes of other port developments in Mallorca, such as El Molinar in Palma and Porto Colom, both of them with "salvem" groups: Porto Colom's is the more vociferous, suggesting that the wishes of residents (and tourists) are being trampled over by the private interests of the yacht club.

The amounts that Alcudiamar will be handing over because of the concession extension may also have something to do with murmurings regarding rents. One understands that a well-known restaurant is considering packing up and going.

A further background element is the rude health of the nautical industry and indeed the regional government's support for it. The administration considers the industry to be a "strategic" one for generating employment, enhancing Mallorca's general image and tackling tourism seasonality, but the industry needs to therefore grow in different ways, and one of them is via the space it occupies. As ever, the environmental dimension is coming up against the needs of tourism. Reconciling the two is never easy; it is often impossible.

The other development, one led by the ports authority, is not one which, on the face of it, involves private interests. As a division of national government it shouldn't be. Yet there do appear to be such interests. It's a story for tomorrow.

Photo: A view taken from Alcudiamar.
Posted by andrew at 7:19 AM