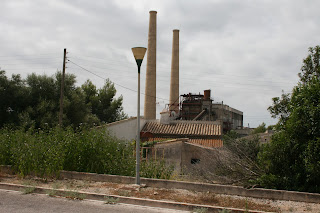 Oh, here we go again. Remember the abandoned plans for the abandoned old power station in Alcanada? The abandonment of both may soon be over. One says soon, but how soon is soon? Ever?

Let's go back in time to days of plenty and projects for which money grew on relics of Mallorca's glorious industrial heritage. Over twenty million had been earmarked for "a clearing in the wood", the name given to the plan for the power station by the winning architects. It was to be a museum of arts and sciences, opened up to the shore and sea and incorporating the very much older defence tower (eighteenth century). It was, furthermore, to have become a reference point both for tourism and for culture in the north of Mallorca. No one ever actually explained how.

The idea wasn't that bad. It still wouldn't be that bad. This is because something, anything needs to be done with the old power station. It's looked after up to a point, but has of course long ago ceased to be used. When they built Es Murterar, some kilometres away by Albufera, there wasn't a plan for the old power station. It was simply left to rot, while the workers who had rented the cottages of the Poblat Gesa found that the urbanisation was allowed to rot as well.

Poblat Gesa will at some point become a shining beacon of residential redevelopment, Endesa cashing in on real estate inherited from the purchase of Gesa over thirty years ago. Gone will be an element of industrial heritage: an urbanisation which served the power station and which had officially been opened with due ceremony by the Generalissimo. The last thing that residents of the revived Poblat will want as a blocked sea view will be a rotting old power station. Time to rethink.

They were there last Tuesday. The Council of Mallorca's councillors for culture and infrastructure. They were examining this ruin. It is recognised as having industrial architectural value under a special plan, which is under a further plan - the land plan of Mallorca - which has spawned another plan, that for areas of landscape intervention. So many plans, so little product.

Under the architect plan, much of the power station would have remained. There's no point in valuing industrial architecture, if you then proceed to knock it down. Hence, and for example, the chimneys would continue to rise, ominous dual erections on the Alcudia coastline, prominent landmarks to be admired by those arriving on luxury small cruise ships docking at Alcudia's "boutique" port. Like the sometime-in-the-future residents of the Poblat, the high-purchase-power passengers demand an agreeable vista. Something, anything has to be done.

The "clearing in the wood" was greeted with some fanfare. Here was the future for the Alcanada power station. The future was very soon on hold. Then there was no future. It wasn't actually economic crisis that scuppered it. Even before crisis truly took a grip, there was an issue with the funding. The then mayor of Alcudia, Miquel Ferrer, said so: money didn't grow on old relics after all. That was in early 2008. Crisis did of course arrive. The power station was not deemed worthy of the millions, billions that the Zapatero government was tossing around under its "E" plans to environmentally buy Spain out of crisis (what crisis, as Zapatero didn't actually say but intimated). There was to be no governmental largesse for the power station.

Maria Salom, the president of the Council of Mallorca during the previous administration (2011-2015), once definitively said that nothing would be done with the power station. But these are different times. These are cultural heritage times of an alternative regime. In fact, the councillor for culture at the Council, Francesc Miralles, seems a decent chap, one who does have a genuine interest in combining culture with tourism. He hasn't, however, said what might happen with the power station. Museum possibly, but there is no clear statement about the future of the clearing in the wood.

One can but hope. The power station cannot simply be allowed to continue in its now decades-long limbo. Might it be a beneficiary of tourist tax revenue? Over twenty million would be a lot: roughly a quarter of annual collection. The regional government says that the tax won't be used for major projects; rather, a series of mini projects. But some revenue could go the power station's way. Don't rule it out.

However the funding might be for whatever the new plan might be, one hopes that this plan is more clearly explained than the last one. More clearly thought through in terms of what a museum (were it to be so) might entail, in terms of who actually might want to visit it and in terms of the return on investment.

* Photo from the abandoned Poblat of the power station taken a few years ago.
Posted by andrew at 6:18 AM