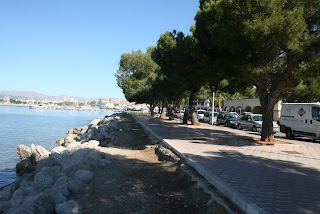 The scheme to redevelop Alcudia between the fishermen's pier and the commercial port terminal is even more controversial than the Alcudiamar planned expansion. There is no potential division at the town hall on this one: it is opposed by all parties.

This area has long been the abandoned child of the Paseo Marítimo. A previous project to lengthen the paseo never took off, and so the bars and restaurants remain somewhat in the shadows of those on the pedestrianised promenade. Furthermore, the area looks abandoned, the consequence of a failure to maintain the one-time Gesa swimming-pool, the playground and the "pinaret", the small pine wood near to the terminal.

Facilities here, such as the pool, are the legacy of the Poblat Gesa that was built on the road to Alcanada opposite the old power station in the late 1950s. They were integral to that urbanisation for Gesa workers: their leisure and recreational facilities. Though these were formerly Gesa (and so therefore Endesa from 1983, when it acquired Gesa), they were always the property of the state via the Balearic Ports Authority. In 2004, an agreement between the town hall and the authority granted town hall use until 2029. This was part of the overall plan for the commercial port redevelopment. When, however, the town hall started billing the ports authority for property tax for the new terminal (in 2010), the authority responded by invoicing the town hall for the Gesa facilities. It never paid.

That's something of the background to what has been a difficult relationship between the town hall and the authority for years. There has been a great improvement since the change in regional government last year, but the redevelopment plan has renewed the clashes.

For the neutral observer, anything that improves the area would seem like a good idea. It is the detail of the improvement, though, which has caused the rows. The company awarded the contract by the authority, Marina Aucanada (Alcanada can be spelled both ways), says that the dry dock - a bone of contention - will be hidden from view, something that the town hall might be willing to accept. It doesn't accept the buildings, the inclusion of restaurants and the potential loss of part or all of the pinaret. This, the pine wood, is considered "iconic" for the people of Alcudia, says the town hall.

There are other "icons". Take the Lovento restaurant. So iconic is it that the square opposite (sort of a square at any rate), officially known as Quarantena, is typically referred to as Plaça Lovento. The town hall is right to wish to defend the interests of businesses which might be affected by new establishments, and Lovento is part of the port's fabric. In the past it has been patronised by members of the town hall during the sepia gastronomy fair.

These new establishments will, we are now told, be cafeterias rather than restaurants. There are categories of establishment with corresponding licences to operate. A cafeteria cannot serve lavish meals: the height of its culinary ambition is, for instance, the "plato combinado", such as steak and chips. Given this, might the authority's plan not benefit the existing restaurants by driving more people to the zone? The town hall seems only to see increased competition that would be harmful.

The state attorney has now been pulled into the affair. This is partly because a decision has to be made regarding the compatibility of the Marina Aucanada award. A challenge was lodged with the town hall by another company which highlighted the fact that 30% of Marina Aucanada's shareholding is with a company called Ocean Infrastructures Management. The wife of that company's administrator is the director of another Spanish state port - Melilla. The law covers such a potential conflict of interest and also places a limit on the level of shareholding by a senior public official - ten per cent.

When the contract was originally tendered, there were three bidders. One of them was Alcudiamar. This was ruled out for financial and competitive reasons: it would have given Alcudiamar a stranglehold on far more of the port than it already has. The other company is one with an almost identical name to the winning bidder - MarinaAlcanada (told you it can be spelled two ways). It's not been said, but it is possibly this company which filed the challenge, which has now been passed to the state attorney.

The town hall, meanwhile, has unanimously backed this challenge. It might yet be that there is a second tender process. But whatever the outcome, the redevelopment highlights the conflicts, as does the Alcudiamar scheme, that arise from a need to increase facilities for the booming nautical industry. Alcudia is very much a part of that industry. It is one that can bring additional riches to the town as well as employment and an easing of tourism seasonality. In the end, the redevelopment, if and when it goes ahead, will be decided on the impact on "icons".

Photo: The area of the port earmarked for redevelopment.
Posted by andrew at 7:15 AM