The Year Of The Demon 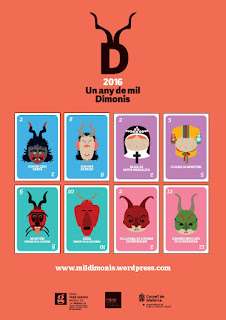 Anyone unfamiliar with Mallorca who were to arrive on 16 January might wonder if the whole island has been gripped by horror. Few parts of the island are unaffected. Fire, demons, beasties. For its ubiquitousness and especially for its symbolism, there is no other fiesta day like 16 January. Not Kings, not New Year, not Easter. Sant Antoni Eve is Mallorca's fiesta. There is another night of fire - the one of midsummer - but Sant Joan does not have the same all-island grip of Sant Antoni and nor is it something which is essentially of Mallorcan origin. It is small wonder that the day of Sant Antoni has been suggested as the new Mallorca Day.

In recognition of the association of demons with Sant Antoni, the Council of Mallorca has hit upon an idea for a "year". 2016 is a year of one thousand demons. Its purpose? To contribute to the discovery, the promotion and shared enjoyment of the demonic universe of Mallorca. The vice-president of the Council and also its councillor for culture, Francesc Miralles, has spoken of wanting to use 2016 as a year to present the demons of Mallorca so as to promote the cultural richness of the island via symbols that form an essential part of island identity. Bravo, though it's not as though demonic promotion hasn't been suggested before, especially in connection with Sant Antoni.

Still, better late than never, and as an introduction to this year of demons, there is an explanation as to different types of Mallorcan demon. They are certainly not all of the fire variety. These are the new demons. Their tradition is much more recent, their whirling, fire-spitting tridents only some thirty or so years old. At Sant Antoni, the new and old demon traditions collide, as there are demons which are identifiable as those of Sant Antoni. They are a class in their own right. They dance, they chase, but they don't threaten to set you on fire.

There is a further category, the demons who are integral to other manifestations of Mallorcan fiesta traditions. These ones include the pitcher-smashing demons of La Beata in Santa Margalida or those who are the demon in the folk dances of the Cossiers. They play a specific part and, as with the Sant Antoni demons, appear only when tradition demands. The fire demons, on the other hand, can engage in more frequent presentations, and there are a few gangs who hire themselves out to towns without a fire-running gang. Nevertheless, they are still very much associated with specific fiestas, such as Sant Antoni, an occasion when they - as the new demon tradition - share the stage with the old, dancing variety.

There is a further part to the demons' story: their accessories. The pitchers of Santa Margalida are one example. The masks are obviously another. But there are also other traditional elements which have become part of the wider demons' picture: bonfires, the xeremier pipes, the weird ximbomba and, very much more recently, the batucada drums.

As a means of promoting the year of demons, a card game has been adapted to feature images of the differing types of demon. Hence, there are, for example, the grand demon of Arta and the Sant Antoni demons of Muro to represent the old Sant Antoni tradition. Or the Filloxera de l'Infern demons of Binissalem who come from the modern fire line of the demons' world. The card game is one promotional device. Others will be a roadshow, conferences and educational activities. But all these raise a question. Who's the promotion for?

It is easy to overlook the fact that the whole demon tradition in Mallorca had more or less died out by the end of the 1960s. There was one town where it was kept alive. Sa Pobla. This town, more than any other in Mallorca, was responsible for maintaining old traditions and for reviving them. The xeremia pipe had all but disappeared before Sa Pobla made a concerted effort to bring it back. So it is only right that so much attention is devoted to Sa Pobla on Sant Antoni Eve. The rest of the island owes the town an enormous debt.

But it is the fact that the tradition did once hover close to extinction which probably goes to the heart of why there is the year of the demon. There is no one in Mallorca who isn't now familiar with the demons, so it might be asked why they need reminding of them. The year is, therefore, reinforcement. A reminder of the roots. A celebration of the demonic varieties. Will the year, however, cast its net wider? Lord knows, it's been suggested often enough that the demons, especially those for the winter fiestas, are ideal for foreign promotion. One fears, however, that the year may pass the rest of the world by.