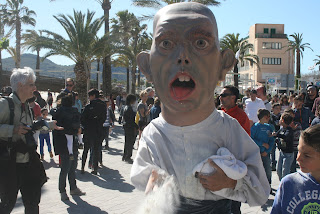 If Rafael Nadal is the epitome of contemporary Manacor and Mallorca - a global name who has amassed fame from a sport largely unknown to the populace of Alcover's era - then Alcover is the figurehead for a Manacor and Mallorca insularity. There are few Mallorcans from history who can hold a candle to Alcover's promotion of deep-rooted and old traditions, ones set in the land of the island's ruralism.

The reverence shown to Alcover could simply have been reserved for his works on linguistics. He was a driving force behind the dictionary of Catalan in its different varieties: its purest form and its derivatives, such as those of the Balearics. Or it may have been for his historical research, as with his study of the times of King Jaume II of Mallorca. It might possibly have been for his place in the religious hierarchy, though one suspects not.

While his linguistic work was sufficient for him to have been placed on the pedestal that he now commands, it was the use of language that means he is unsurpassed in having captured tradition and custom. This was the language of the folk tale.

In 1896, the first volume of "Aplec de Rondaies Mallorquines d'En Jordi d'es Racó" appeared. Jordi d'es Racó was Alcover's pseudonym. His collection of Majorcan folk tales was to stretch to numerous volumes (twenty-four in all). And so many are the tales that it seems fantastic that an island could have provided the number it did. Just as fantastic is the nature of these tales, and it should be noted that in this context "fantastic" means based on fantasy.

Alcover set about collecting these tales in the manner that collectors elsewhere did. An English contemporary of Alcover's was Cecil Sharp. His interest wasn't tales as such but their singing and their performance. Sharp sought to revive the folk songs of English villages and Morris dancing. He did so because he felt that these traditions were all but dying out. Alcover thought exactly the same. If we generally attribute a decline in Mallorcan traditions and culture to the upheavals of the tourism boom and the movement to the coasts, then we do perhaps need to revise our understanding. In the late nineteenth century there was a different type of upheaval, one of emigration forced onto a rural population.

What Alcover and Sharp had in common was the nature of the raw material for the tales and the songs. There was virtually no written documentation. The source of the material was spoken: the oral tradition. In this way, therefore, Alcover combined his work on dialects that was to inform his dictionary (and other scholarly works) with the manifestation of dialect - the handed-down folk tale, which could essentially be the same in different parts of Mallorca but with its own peculiarities in terms both of content and language.

The initial volumes of the "rondalles" included such tales as "L'amo de So Na Moixa" (amo meaning owner). From this tale was developed the bighead character that forms part of Alcudia's S'Estol del Rei en Jaume - King James' group. He is the mad miller who goes around throwing flour over passers-by. This somewhat jovial character does, however, disguise an underlying menace and mean-spiritedness. Alcover's tales are littered with the fantastic - dragons, monsters, crazy people - but these surreal figures have some reality of the times when the tales developed: harshness of the rural way of life; vendettas; superstitions; mistrust; revenge.

The mad miller is just one example of how Alcover's tales have been made physical. Another is the tale of the Muc or Much, a story of giants, treasure and beasties, the setting for which is the "Puig de Reig" near Sineu. The Much has become the theme for its own fiesta, and a weird one at that, which is held each August.

The Mallorcan folk tale has undergone two periods of revival. There was Alcover's own and there is the one that is very much of the present. Storytelling, sometimes musically, is everywhere. And this current-day tradition owes virtually everything to one man: Antoni Maria Alcover. A week of dedication is the least he deserves.