When Mallorca Had A Jimi Hendrix Experience 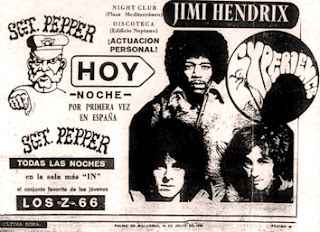 The history of rock will be revealed this evening in Palma's auditorium. Among acts which comprise this history there will be those which have lost members along the way, those which have perhaps surprisingly clung onto them and others who have long passed away, despite the guy working down the chip shop who swears he is the act in question.

Of some of these acts, they are by no means solely confined to today's "History of Rock" show. In Mallorca we have our Elvises. There are Beatles too, and in a month's time The Mersey Beatles will be taking to the same auditorium. There are Queen and Pink Floyd spectaculars, reminders of times before Freddie Mercury, Syd Barrett and Rick Wright departed this world.

Tribute acts, be they grand or less than grand, share one thing in common. An obvious thing. However good they might be, they aren't the real thing. There is an inherent disappointment in knowing that a Led Zeppelin isn't Led Zeppelin and, in its original form, couldn't possibly be, John Bonham having joined Elvis, Lennon, Mercury and Wright in performing "The Great Gig In The Sky".

Mallorca, it might be noted, fails to find a place in this history, which isn't surprising. Rock's history is essentially an Anglo-Saxon one of American and British dominance with bits of Canada and Australia chucked in plus some German weirdness. Nevertheless, Mallorca has its place in this history, if partly only because of the dim and distant past when the greats of rock turned up on the island. The Kinks' fateful tour has been mentioned before, but in addition to them there were, for example, The Animals, while it was a former member of The Animals - Chas Chandler - who was instrumental in bringing an act to the island in 1967. Or was it 1968?

As is so often the case, there is some slight confusion about dates. But it was 15 July, 1968 and not 1967, given that the venue was Sgt. Pepper disco in Palma (and the Sgt. Pepper's album was only released until June 1967). The act was The Jimi Hendrix Experience, and confirmation of the date is helped by an advert that was carried by "Ultima Hora". Barely legible, it is just about possible to make out the 1968.

Anyway, the ad read: "Performance in person. Tonight. The first time in Spain. In the most "IN" club. Supported by the favourites of the young people - Los Z-66". Almost fifty years on, the legend of Hendrix's appearance is still spoken about. Sgt. Pepper in the Plaza del Mediterráneo in the Gomila area of Palma was in fact officially opened on that night. Its owner was Mike Jeffrey, who by then had more or less taken over as Hendrix's manager from Chandler. He had a luxury property in Banyalbufar. In 1973, he was killed in the mid-air collision of the Spantax Convair and Iberia DC-9 near Nantes: he had been on the DC-9 that had taken off from Palma.

The story of the Sgt. Pepper gig has it that Hendrix cracked the walls with the volume that came out of his Marshall and Sound City speakers. Those attending were mostly British tourists. Hendrix was all but unknown in Mallorca, save for the likes of various locally based musicians, among whom were a couple of members of Los Bravos. Noel Redding and Mitch Mitchell, who had arrived in Mallorca a week before the gig, had spent some time jamming with Los Bravos. Hendrix himself arrived on the day and stayed at the Victoria, one of Palma's grand hotels, and after the performance - legend has it - was involved in a night of decadence with four Swedish young ladies.

Hendrix never returned to Mallorca and two years later he was dead. Whether he features in tonight's "History of Rock" I can't say, but in terms of Mallorca's rock past he most definitely has his place, and it was in Gomila, where they still talk of the night he cracked the walls.

There is, as it happens, a further touch of rock history about to be re-created. This coming Saturday, the theatre in Lloseta celebrates "Neil Young 70th", and among those doing the celebrating will be Jaime Anglada, a favourite, we understand, of King Felipe and Queen Letizia (they are friends of Anglada and his wife). He, Anglada, might not find himself in a stage show for the history of rock, but he is evidence of rock's presence - a home-grown one - in Mallorca.

* For information re Hendrix in Mallorca, I acknowledge the book by Salvador Domínguez, "Bienvenido Mr. Rock ... Los Primeros Grupos Hispanos 1957-1975".
Posted by andrew at 6:54 AM