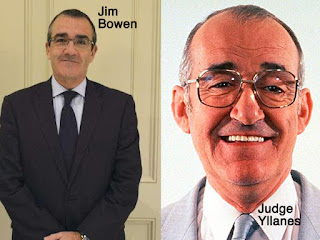 There are those moments when you see someone and suddenly realise you are looking at Jim Bowen. "Let's have a look at what you could have won." Bully's special prize is ... ? Well it could have been having the opportunity to pack Princess Cristina and others off to choky. He quite liked the idea of presiding over the trial of the Infanta, and he has said as much, just as he has said that "Nóos" (the name of the case that has led to the trial) "was a sweet" after some 26 years in the profession. Instead, there's likely to be another special prize. Becoming a deputy in the national Congress.

The lookalike of the "Bullseye" presenter of long ago is Juan Pedro Yllanes. Early in 2016 he was meant to have been heading the judicial process in which the Princess (unless her lawyers can get her out of it), the Princess's husband, the former president of the Balearics, Jaume Matas, and others all stand accused of less than honest brokering under the catch-all Nóos case title. Yes, it was difficult to give up that sweet, but the now ex-judge Yllanes has been willing to forego this in order to become part of what he believes will be "an exciting legislature": in other words, the next government of Spain.

This unexpected career change has certainly not gone unnoticed. It would have been noticed whichever political party Yllanes had opted for, but it has been especially noticed because there is only one party he would have given Nóos up for. Podemos. And as Podemos looks destined, according to the polls, to secure a couple of seats in Congress, the former judge will be off there in the new year, no doubt keeping up to date with events in the Palma court via a Twitter feed.

Podemos had of course attempted to lure José Castro off the judge's chair and take its Congress shilling, but Castro - the investigating anti-corruption judge who has done the legwork for Nóos - has outstanding business to attend to, and most of it involves Matas. Maybe Yllanes is second choice, but this is not to diminish the scale of the coup that Podemos has pulled off.

With the party having already persuaded the former chief of defence staff, General José Julio Rodríguez, to take up the Podemos Congress cause in Zaragoza, it is marshalling election resources with impressive CVs. If there were a concern that Podemos lacked credibility in terms of individuals associated with it, then it appears determined to remove such a doubt. Moreover, these are not individuals who have grown disenchanted. Yllanes has observed that the judiciary (and the state prosecution) in the Balearics is in the vanguard when it comes to pursuing corruption: he is walking away from a system of which he is an admirer and not a critic. Credibility is thus reinforced.

And this credibility has caught the right, including the right-wing media, on the hop. Mariano Rajoy and the Partido Popular have criticised him - but then you would expect them to - while the impression is that the media don't quite know how to react. The announcement came out of the blue, leaving no time for co-ordinated and aggressive media reaction to be developed. Nevertheless, Yllanes will have to anticipate enduring such a reaction, and it probably won't only come from the PP and the right-wing media. There is the legal institution as well. Its rivalries and jealousies are well known and they were fully exposed when there was the ganging-up against investigating judge Baltastar Garzon, who was to later find himself being disqualified.

There again, Yllanes is part of the Podemos democratic regeneration project, and this includes the judiciary as much as it does political parties. He, in emphasising how well the Balearics have done in pursuing corruption, points a finger elsewhere in Spain, implying that there has been less rigour in going after both the PP and PSOE.

A further potential pitfall for Yllanes is that he will be pigeonholed as a one-issue politician in advancing the Podemos anti-corruption cause. It was no accident that the presentation of him as a candidate for Congress was made in front of Palma Arena, the focus of so much of Judge Castro's attention. But there is the rest of the Podemos programme into which he has to buy. Presumably he has.

That presentation was notable for the fact that it featured a beaming Alberto Jarabo as well. It was Jarabo, we are led to believe, who made the overture to Yllanes and not Podemos national leader, Pablo Iglesias. As such, it represents a triumph for Jarabo. The perception is that it is Laura Camargo who wears the Podemos trousers in the Balearics. The Yllanes coup has weakened this perception and so given Jarabo greater personal credibility. And as for Yllanes himself. Well, he's no Jim Bowen.
Posted by andrew at 7:18 AM