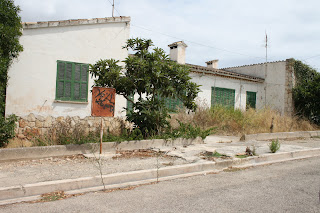 "This small development has been there for 50 years. It is a dismal collection of whitewalled cottages with green shutters, an open space that once had a small school and now has roads suffering inattention. It looks abandoned, and the people who live in the cottages that are still occupied, are complaining about just that - abandonment by Gesa (Endesa). And there are suspicions as to what Endesa might have in mind for these tenants. If one goes along the road to the neighbouring butane factory, there is open space to the right with a large estate-agency sign saying for sale. Behind this land is the poblat."

I wrote this in 2008. It was about the Poblat Gesa in Alcanada, one of the more interesting developments in Alcudia and not only because of its curious heritage as a settlement for workers at the old power station opposite.

The Poblat dates back to the same time as the power station. The architect Josep Ferragut was responsible for it, as he was also largely responsible for marking out the project was to become the City of Lakes - Bellevue, the canals, the lakes and all that. It is a place that has long intrigued me, and it intrigued me more when I spoke with people about it. There were the odd bungalows that were well-kept, with neat little gardens. These belonged to the last legitimate tenants. Even in 2008, squatters had started to move in.

The rot apparently set in when Endesa acquired Gesa in the 1980s. Maintenance and upkeep fell off. It seemed obvious what the intention was. This became more obvious when Endesa started the process of trying to get rid of the tenants.

It's said that it went up for sale in October 2015. I'm not so sure. Or perhaps that for-sale sign in 2008 had referred to something else. Either way, it was the inevitable culmination. And now there is a buyer, a Madrid-based investor, who plans to rehabilitate the 29 dwellings, the old chapel and social centre. The school is no longer there. What will this rehabilitation be? The Poblat was on sale for 3.1 million euros in 2015. It does have some protected status, but even so ... .

Sixty years after Ferragut's small development came into existence, it will now change. Sad in a way, though given the state it has been allowed to fall into, it has to be for the best.

Meanwhile, there is the ongoing matter of what is opposite - the old power station. It looks like a ruin, and Endesa wants it to be declared a ruin. Endesa would ideally knock it down. The one-time workers at the plant were used to the sight of it. What about new occupants of the Poblat?
Posted by andrew at 8:02 AM