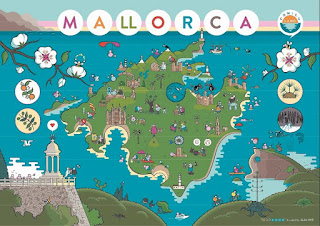 Fitur, the Madrid international tourism fair, starts on Wednesday next week. Along with London and Berlin, it is one of the three main fairs for Mallorca and Balearics promotion. Despite the international of the title and unlike the other two fairs, it is more of a domestic event for Mallorca. It shouldn't be forgotten, though, that the domestic market ranks number three behind the UK and Germany in terms of island tourist volume. It's an important occasion.

Much to the disgust of Podemos, who have wanted the tourism promotional budget to be slashed to one-sixth of its already meagre funding, the Balearics will unveil a new stand and a new message: "Better in Winter". As the representatives set off for Madrid, let's hope there is no need for snow to be swept off the runway in Palma (the forecast suggests that there may well be snow at sea level next week). Better in winter; it can rather depend.

We all know, of course, why this slogan has been adopted. We will find out whether the current desire to press for increased winter tourism works or if it is just another vain attempt largely designed to try and prove to a sceptical public that the tourism ministry knows what it is doing and is indeed genuinely committed to winter expansion. There are those who would prefer that the ministry failed. What was it that Laura Camargo of Podemos said about workers not having to work all year round? Seasonality, if it means that workers can relax for several months and that there aren't ever more tourists, is a good thing where certain politicians and political ideologies are concerned.

While the ministry, or to be specific the Balearic Tourism Agency (ATB), is telling the Spanish traveller that things are better in winter, the Council of Mallorca, which has still yet to be formally handed tourism promotion responsibilities, is making a pre-emptive promotional strike. Long-time observers of the island's promotion will feel that this has long been something of a comedy. The Council seems inclined to agree. It's using the comic device to promote Mallorca.

Actually, that's unkind. The initiative is different. It's rather charming. It makes one wonder why such a touch of innovation has proved to be beyond the ATB. But while the Council, similar to the government in this regard, wishes to promote cultural, sport and nature tourism, the images don't all seem to tally with this. There is still a hint of that old stand-by, sun and beach. Better in summer. There again, an image of three people in a small boat steering themselves across a turquoise sea to an unspoiled beach with velvety white sand backed by dunes is indicative of ... . Indicative of what precisely? Nature? Presumably. It looks more like an idyllic summertime promotion for the seeker after beach and sun. Moreover, it is an unspoiled beach of the type that the "saturationist" lobby maintains is being overrun and environmentally damaged. Still, at least the boat is environmentally correct: it doesn't have an engine.

Meanwhile, the comic map of Mallorca does highlight the culture, sport and tourism. There are religious buildings, a windmill, lighthouses, castles, Moors v. Christians (the Santa Ponsa version). There are people kayaking, cycling and hang-gliding. There are flowers and palm trees (unaffected by the red beetle), while Mallorca is uniformly green except for splashes of lighter green. One wishes the Council well. It's not a bad idea at all - winter or summer.
Posted by andrew at 7:54 AM