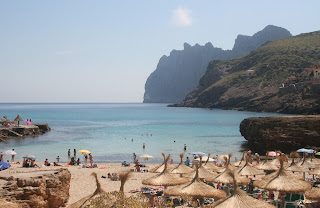 Roughly halfway along the road between Pollensa and Puerto Pollensa (very roughly, because it's nearer to Pollensa) is the turn-off for Cala San Vicente (aka Cala Sant Vicenç). It's an intriguing place, not least because its name suggests that there should be a cove named San Vicente when there is not. It's essentially four coves, none of them with any hint of a Saint Vince. So what's with the name? It comes from the name of the estate - the "possessión" - which was listed among all the various estates to be divided up among the supporters of Jaume I following his thirteenth century conquest of Mallorca.

It is suggested that the name goes back a great deal further, so it may or may not have something to do with Vincent the Martyr, who came to an appalling end at the hands of Diocletian, as did most other Christians who had the misfortune to have encountered the one-time Roman Emperor. Otherwise, there doesn't seem to be a particularly good explanation as to how the name came about, although it is known that the cult of Vincent was present (at least on the mainland and especially in Valencia) during the centuries of the Muslims.

The name aside, and coming to the present, Cala San Vicente is intriguing for the way in which as a resort, and only a tiny one, it was allowed to embrace such striking differences of touristic existence. It was for this reason that I once wrote about it as being a place that didn't really add up. More or less shoulder to shoulder was early Mallorcan all-inclusive invasion (the Don Pedro) and a genteel style of tourism with vague echoes of the Raj.

This had been impressed upon me, and we're talking some years ago now, when I'd wandered into the reception of the Moraleja. An English gentleman of advanced years, a copy of "The Telegraph" in his hands, was sitting in a straight-backed, pink-patterned chair. "It's paradise," he suggested. "Like your own home. Your own villa." I nodded. Not having my own villa I was uncertain of my reply, but I took his word for it and bade him farewell, leaving him to the silence save for the birdsong and the breeze rustling the bracts of the bougainvillaea and the sheets of an English broadsheet.

The collision in touristic styles seemed something to celebrate rather than denigrate, if only because of the weird juxtaposition, something that was further accentuated when they started putting up residential new builds, the creations of the architectural apostles of the post-Modernist Lego box style replete with grey and neutral non-colours and a conspicuous insistence on aluminium. This is not unpleasing architecture, but it does rather depend on context. Cala San Vicente had seem unprepared for it.

Denigration, such as it was, once came from Matt Rudd in "The Sunday Times". Confessing to be a "holiday snob", Rudd had been singularly unimpressed, having been pointed in the direction of CSV by a "gnarly finger" in an unnamed other resort. While it is true, or at least someone told me so, that flabby men wearing only their underpants could wander on to the streets from the Don Pedro (this was, I would say again, some years ago), to castigate the whole of the Cala seemed mightily unfair. What had last days of Empire in the Moraleja said? Paradise?

What else is there to intrigue? The caves of course. The Alzinaret caves and necropolis of Bronze Age prehistory. And there's the horse of course. The horse promontory, the Cavall Bernat cliffs, stretching away from Cala Molins. Want to know something about these that you might not know? The name seems obvious enough - Bernat's horse - yet it is said to be a corruption of an earlier appellation: "carall armat". In Spanish this would be "carajo armado". Look it up because sensitivity suggests I should not elucidate, but put it this way, it has to do with phallic form.

Call it what you wish, the promontory has been an inspiration for many, not least the painters of the early twentieth century who were to capture the Tramuntana and its coastline and who were to be the progenitors of an art culture in the Cala. Those painters offer a separate and intriguing story. In 1916 the writer Pedro Ferrer Gibert coined the term the "Pollensa school" for what was a "Mecca for artists". Ferrer wrote about the painters in Cala San Vicente. They stayed in what was then an improvised pension - Can Niu.

They're holding their fiestas in Cala San Vicente this weekend. They don't make a lot of fuss about the fiestas. Keep them rather quiet you might almost say. Which seems to befit the Cala. Except that at midnight they'll be setting off fireworks, arousing Bernat's horse with cascades like the colours of vermilion cast on its ancient rock face that intrigued the painters of a century ago.
Posted by andrew at 6:49 AM