The Weird Flying Machine Of Llucmajor 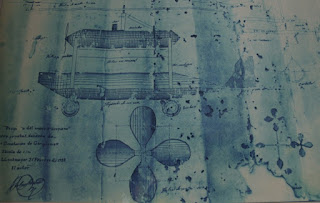 Antoni Verger is the candidate for Congress with the Més party. The other day he spoke about his party's proposals for air transport. He did so at the Son Bonet aerodrome, what had been, before Son Sant Joan was expanded and opened in the early 1960s, the destination for tourist flights coming into Mallorca. Nowadays, the aerodrome serves as a base for, among others, Sloane Helicopters. For the visitor to Mallorca, Sloane provides a range of charter trips and combined activities, soaring above the Tramuntana and offering the visitor aerial views of stunning coastline and mountains.

But the modern-day technology of helicopters is a world away from days of yore when men in their flying machines came up with strange inventions and, having taken them to the air, more often than not saw them plunge back to earth all too rapidly. One of these men was a Mallorcan. His name was Pere Sastre. Born in Llucmajor in 1895, Pere de Son Gall, as he was to become known, was for a time - as noted by the town's historian - one of its best-known residents. There was, apparently, an air of mystery and eccentricity that surrounded Pere and his unusual hobbies and inventions, principal among which was the one which was to make him most famous. At the age of just 26, Pere invented something known as the comet-giro-plane. Part helicopter, part plane, the intention was for it to take off vertically and be used mainly as a rescue craft either by hovering in the air or landing on sea, courtesy of it also being part seaplane.

The main problem that Pere encountered in getting this peculiar Heath Robinson affair off the ground (so to speak) was money. A lack of it. He would play the pools and the lottery in the hope of getting this money. He was to also stage an exhibition to show off his crazy invention. With the help of a local blacksmith and carpenter, he built a hangar in which the heli-plane was stored. For three pesetas, the locals - and indeed anyone else - could come and admire his great work.

Other sources of funding that he sought were from the provincial authorities on the island and from banks, but still the resources were only limited. His first actual prototype was to be a failure, despite his having got hold of a Harley-Davidson engine and some parts from the Guardia Civil. Another potential line of finance that he looked for was from the national government, and it was this involvement that was to create what, till this day, remains the greatest controversy surrounding Pere's invention.

The minister he approached was one Juan de la Cierva y Peñafiel. He held a variety of posts in government, one of which was for the "Fomento". This development ministry still exists, its old title having endured and being used to cover the likes of air transport in Spain. Pere submitted his design, asked for some money and received short shrift. The minister had decreed that Pere's flying machine lacked "public interest".

There are those who, almost ninety years later, will still insist that Juan the son nicked Pere's ideas. The main flaw in this argument is that Juan the son was already working on helicopter-plane hybrids before Pere sent his plan to the ministry. It is true, though, that five years after the plan was received, Juan the son was establishing the Cierva Autogiro Company in the United Kingdom.

There is little or indeed no evidence that Pere's plans were copied. In all likelihood, Juan the son was totally unaware of them. But the fact that he was the son of the minister who turned down the project has allowed the controversy to persist for all the years that it has. There is also the fact that Pere, because he was in truth a farmer with no actual qualification for his invention, was rejected through an elitist royal order of 1897 under which proposals by those lacking the relevant qualifications were basically ignored.

Pere's invention was, if truth be known, a total failure. It did actually take to the skies, but didn't get very far. Just one of the drawbacks was that the materials were too heavy. Eventually, he came to be ridiculed in his local community. His obsession with his invention, soon eclipsed in any event as aviation design moved on apace, left him in debt. He died in 1965, by which time few people remembered him. But they do remember him now, his story having been revived, and the controversy also. Was his design stolen? The answer is almost certainly no.
Posted by andrew at 7:59 AM