When The Lights Came On In Alcúdia 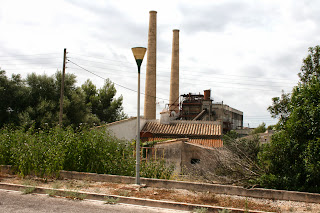 In 1913 electricity supply came to eight Mallorcan municipalities. They were Capdepera, Son Servera, Petra, Porreres, Campos, Banyalbufar, Sencelles and Alcúdia. If you know your island geography, you will appreciate that electrification did not exactly follow a logical pattern. Capdepera and Son Servera are neighbours as are Porreres and Campos, but as for other towns, Banyalbufar is stuck out on the west coast just above Estellencs, and Estellencs didn't get electricity until 1926.

Electrification of the Balearics actually started in 1892 but not in Mallorca. It was Menorca (Mahon) which was to initially see the light. The first town in Mallorca to have an electricity company and electricity supply was not Palma, as you might have thought it would have been, but little Alaró. That was in 1901. In the following year, a neighbouring town, Consell, became the next as did Manacor, which is not a neighbour of Alaró's or anything approaching being a neighbour. It was 1903 when Palma got electricity and, though there was a burst of energy (so to speak) in 1905 - Andratx, Inca, Mancor de Vall, Binissalem and Caimari - and 1907 (Pollensa but not the port; it was to be a further nine years before Puerto Pollensa had a supply), development stalled until the eight towns named above were hooked up.

There were at one point 59 distinct electricity companies in the Balearics, a number which isn't a great deal less than the total number of municipalities. Over time they merged until the two oldest and grandest electricity companies - La Palma de Mallorca, Compañia Mallorquina de Electricidad and La Sociedad de Alumbrado por Gas - themselves merged and formed GESA in 1927; GESA was taken over in 1983 by Endesa.

GESA, though it didn't exist in 1913, was to become central to the development of Alcúdia, one of the towns which celebrates one hundred years of electricity this year. The old power station near the port, where incidentally there is still a sub-station, came into existence in 1957. It was workers at the power station who gave a boost to businesses in the port area. Though tourism obviously became important, Puerto Alcúdia grew as much on the back of its power station and its construction as it did on the back of tourism.

The old power station was of course run down and stopped production in the 1980s, the new and far more powerful Es Murterar facility by Albufera having taken over and Endesa having taken GESA over. So, thirty years on from that acquisition and one hundred years on from the first electricity having been produced in Alcúdia, there is to be a celebration of the anniversary and of the history of the town's electricity, a history which, with the exception of Alaró and its odd claim to electrical fame and of Palma, is the most important in Mallorca.

Prior to this year's Alcúdia Fair, itself celebrating 25 years, an exhibition will open that is dedicated to the one hundred years of electricity. There will also be a video documentary and the presentation of a book by the notable Alcúdia historian and geographer Manuel Espinosa Galán.

All of this should be very interesting, though doubtless one will have to battle with either or both Catalan and Castellano to make any sense of it, but it will surely shed some light on the origins of 1913 and all that. Unlike Pollensa, for which Bartomeu Aloy's founding of the electricity factory in 1907 is well-chronicled, or Sa Pobla, where the one-hundredth anniversary of electricity was celebrated last year and for which there is also a good deal of historical information, Alcúdia's history is rather more obscure. But, buried in an edition of "La Vanguardia" for 30 January 1913, there is a short notice. It reads: "In Alcúdia, a meeting took place to discuss the proposition from a house of Sabadell (I'm not sure what this refers to; it could be that house means business) to install electricity in the town. Today a further meeting is due to take place in order to arrive at a definitive agreement."

In a few days time, I shall probably find out what the house of Sabadell refers to and who it was who was responsible for Alcúdia's first electricity.

* Photo of the old power station taken a few years ago. The photo was taken from the Poblat GESA over the road from the power station, the urbanisation that was built for GESA workers which has fallen into a rather bad way.
Posted by andrew at 7:56 AM